During an emergency there is no room for error. You need to know the equipment you have like the back of your hand, and your team must be trained to know exactly what they need to do for smooth, safe operations. Building up to this point can be tricky and requires quite a bit of research. Though difficult, the work you put in before the storm will make all the difference once you need your emergency communications equipment.

Your options for satellite internet are varied. Ka-band or Ku-band? Flyaway, driveaway, or a communications trailer? Just satellite, or a hybrid system with cellular, too?

As you learn more about your options, consider the unique circumstances around your possible deployments to determine what will be best for your team.

Simply put, Ku-band and Ka-band are distinguished by the range of frequencies they each read. Ku-band antennas use frequencies between 12 to 18GHz, while Ka-band use 26.5 to 40GHz. Each system comes with various pros and cons which may impact your final decision.

Ku-band antennas work on a wide range of networks globally, including Expedition Communication’s privately managed iDirect network. They connect to a geostationary satellite 22,000 miles above the earth, broadcasting a signal that can be read throughout a very wide geographic range. Our network, for example, uses only two satellites for coverage across the entire contiguous United States and Caribbean. Our iDirect network map, covering most of North America and the Caribbean.

Having such a wide range makes Ku-band networks more resilient to speed fluctuations during natural disasters. If there is a hurricane hitting the East Coast, the network will have much more traffic from emergency response crews in that region- but the speed will not be diminished because it is a proportionally small change over the entire coverage range. This is one of the main reasons that Ku-band networks are a favorite for many first response agencies.

Heightened reliability does come with drawbacks, however. Because the satellite is so high up, latency is a constant issue. Latency is the time it takes for an antenna to reach the satellite, and then for the satellite to beam back to reach the antenna. Speeds are often much lower than Ka-band networks as well. The higher the frequency, the more bandwidth that can be extracted, the higher the potential data transfer rate. Since Ku-band satellites operate on lower frequencies, speeds are often lower and more expensive due to increased energy use.

Satellite antenna options for Ku-band networks are often larger than their Ka-band counterparts. Most antennas range from 0.85 meters to 1.8 meters, with larger dishes capable of higher bandwidth. Most major antenna manufacturers such as C-COM, AVL, and Winegard have options for the Ku-band.

Ka-band antennas offer lower latency, a smaller antenna form factor, and generally higher data speeds. Bandwidth is broadcasted through a constellation of “spot beams” that break up a large geographic area into one of many distinct service areas. While this is great for optimizing speeds, it does require more sophisticated equipment and the potential for network congestion within a spot beam during an emergency event.

Viasat, the premier Ka-band satellite network in the United States, gets past this issue by offering enterprise-grade plans and first responder-grade plans to minimize the effect of network congestion for teams that need connectivity the most. While consumer throughput may be heavily reduced during an emergency, first responders should retain adequate access to the network to meet their needs.

Once you determine whether a Ka-band or Ku-band antenna is best for your team, it is time to think about the type of antenna. The two primary types of satellite internet antenna are driveaway, or mobile-mounted, and flyaway, or case-based.

Driveaway antennas are permanent systems that mount to the top of a vehicle and automatically connect to a satellite at the touch of a button. Deploying the antenna is effortless, and it is as mobile as the vehicle that it is mounted on. For vehicles that are a part of an emergency response fleet, this is the best option. 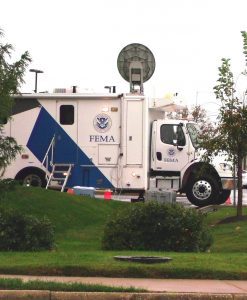 Driveaway antennas come in many different sizes from a few different brands.

The main two considerations for mobile satellite antennas are available roof real estate and available storage within the vehicle. The roof must be strong enough to support a device weighing more than 100 pounds. Some cars, vans, and recreational vehicles may not meet this requirement. If a roof is made of fiberglass or a similar material, it will not be load bearing and will be unable to support an antenna without a special mounting plate.

Mobile antennas require an antenna control unit (ACU) and a modem. These can either be placed on a surface or mounted to an equipment rack. Before deciding on a mobile antenna, make sure you have enough room for the equipment within the vehicle for safe storage and operation.

Flyaway units are airline-shippable satellite internet antennas contained within 2-3 large cases. When the antennas are needed, the cases must be opened and the antenna set up. This process generally takes between 30 minutes and an hour depending on the level of expertise of the person deploying the system. Some are smaller and easier to set up, like the 60cm AVL or the Manpack line by C-COM, but most are large and require 2 to 4 cases worth of equipment.

Some flyaways can be carried in a large backpack, while others require multiple large containers for transport.

Flyaway antennas can be purchased or rented as needed. Though renting may seem like a tempting option to cut costs, consider the circumstances. If a disaster is likely to strike quickly, you will not have time to receive the equipment before it must be deployed. If the expectation is that you will need a rental unit two to three times a year, it is likely more affordable to just buy a flyaway and store it when not in use. The best resource to determine which option will work for your needs is one of our team members.

If your needs are a bit more comprehensive, an Expedition Communications Emergency Communications Trailer (ECT) may be a great fit. These units are fully customizable to include anything your team may need in an emergency event. Each unit includes a satellite antenna and most include a cellular router as well. Some common upgrade features include wraparound floodlights, mast-mounted camera systems, mesh networks, VoIP phone systems, internal workstations, and much more.

Some flyaways can be carried in a large backpack, while others require multiple large containers for transport.

Now that you have your system, you need to know how to properly use it. We have seen state of the art systems fail when they are needed due to user error- don’t let this happen to you. Operation is usually simple as long as you take certain precautions before your equipment is needed.

It is imperative to routinely deploy your antenna for a few reasons. First, you want to make sure you are using the most recent firmware available, and updates are applied when your antenna is pointed and connected. If your antenna lays dormant, updates are not applied.

Over time, certain components of your antenna can degrade and run into issues. The nature of these issues will vary depending on the make and model of your antenna, with AVL being the most reliable in the long term due to their cable-driven movement system. The best way to avoid surprises with your system is to regularly deploy it, so compromised parts can be dealt with before an emergency situation.

Testing two rental flyaway systems before sending them out.

Like anything else, the more you do it the better you understand it. Making a habit of testing your satellite antenna monthly will make the setup and deployment second nature, helping to offset any performance jitters from having to use the equipment during an emergency situation. Testing your antenna may add a bit of work to your schedule, but is well worth the training and peace of mind.

Just because you understand the ins and outs of your system doesn’t mean you’re done. Anything can happen during an emergency, and you may not be available to set up and deploy the system. To make sure that communications can be maintained during an emergency, have regular training sessions for different team members that may potentially have to set up the system. By preparing for these unlikely contingencies, you will have all bases covered and will be well-positioned to handle an emergency.

Just because a service plan worked for you in the past doesn’t mean it will continue to meet your needs. Your team should be constantly evaluating how your usage is evolving, and updating your service plan to reflect the new requirements. Sometimes this will involve reducing the service plan capabilities, and sometimes increasing the service plan. The important considerations are the maximum throughput the system may need to provide, how much data could potentially be consumed, and how long of a period the equipment may be needed for. Note that each of these three factors are expressed in terms of the worst-case scenario.

During an extreme weather event, you will need your equipment to deliver. Preparing for the worst possible scenario allows you to cover your bases and prevent any delays due to insufficient throughput. For those on metered plans or 10-day plans, it could also mean a significant cost savings if overages regularly occur or occur for prolonged periods of time.

The better your team understands their data needs, the better equipped they are to pick the right plan for their use and avoid delays in the field or expensive overages.

Satellite antennas are a requirement for any emergency response team, but other considerations should be made as well. While your satellite will act as the first larger throughput conduit after the storm has passed, there are options that can help to fill in the gaps.

While the storm is active, terrestrial lines and cell towers are likely to go down, leaving your team in the dark. Satellite phones can be used to maintain simple voice and text communications during this period, while also offering an easy communication medium until Cell on Wheels (COWs) are available to provide cellular service.

The best satellite phones for emergency response are the Iridium Extreme PTT, the Iridium 9555, and the Isatphone 2. Each of these phones are built to handle extreme weather conditions with ease, especially the Extreme PTT. Designed with simplicity of use and durability in mind, each of these satellite phones will deliver during a disaster scenario.


From left to right: the Iridium Extreme PTT, Iridium 9555, and the Inmarsat Isatphone 2.

Your best options depend on your location, possible emergency scenarios, and much more. Getting in touch with an emergency communications expert will be your best bet to learn about the options that make the most sense for your team.